Walnut St. Labs initial run of the 3D Printer Boot Camp was a complete success. We’ve been updating our progress along the way, and everyone’s hard work paid off. 5 local innovators walked in last Friday 6/26 and each one of them walked out with a 3D printer they built themselves with the help and support of one another and the resident Maker Technicians at WSL. This was one of our most exciting events I’ve witnessed here. I sat down with Ben Bock, one of the leaders of the project, to discuss more about the program, the goals, and the journey leading up to Friday.

Q: Why the boot camp? 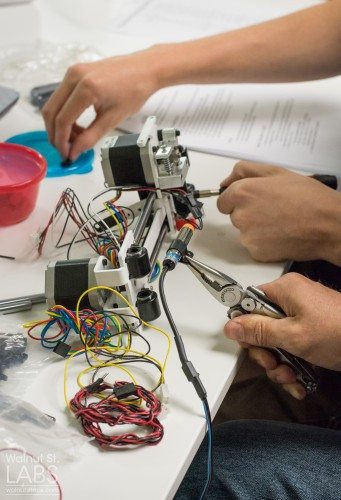 Ben: “I wanted to bring in and account for the people that get excited about 3D printers but aren’t exactly sure how to use them or the applications of one. I see people that walk by and get excited about the prospects of 3D printing when they see the printer in our window display. It was important for me to show people how easy and accessible they can be with the right support network and community of developers.

There are already great Makerspaces and fabricating networks in Philly, but for many people in Chester County that can be pretty far away. The interest was already here locally, so we wanted to bring a Mini-Makerspace to the community here.”

Q: What were your feelings going into it?

Ben: “We are entrepreneurs without the luxury of carefully planning this kind of stuff out. We just had no experience doing anything this big with 3D printers before. Some of the fabrication companies that we talked it over with either didn’t believe us or thought it was too risky. We were excited when 5 people somehow believed in us enough to sign up for it. We sold out in the week we started promoting it.”

Q: Any trouble arise during the actual event?

Ben: “We had no serious hangups. We ordered 6 kits since we were originally going to have 6 people. It’s lucky that we only had 5 people because one of the kits had some missing pieces. That was the one we were prototyping the day before to get familiar with this specific model and make sure there were no bugs in the software we used. Did I mention that we bought and built all the tables and chairs for our new space the day before as well?” 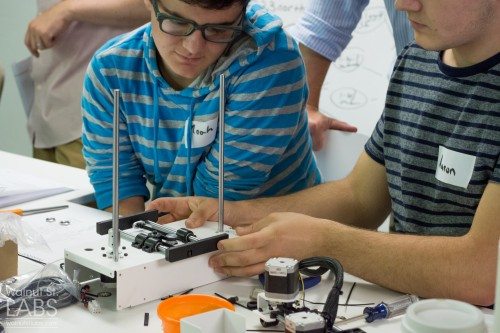 Ben: “We got the Play Kits from Printrbot for the participants to build. We set up a new Mini-Makerspace on the lowest floor with new furniture and everything. Our team, Andrew, Chad, and Peter, were there to answer questions and provide feedback. Everyone was working hard on building all of of the equipment. We brought in food and made a good time out of it. The hardest part was trying to get everyone to finish in time. Not everyone was able to fully print something out by the end of it, but we made sure to follow-up with those that didn’t print anything out to check that they were able to get it working at home. They did! We also introduced them to the software they can use and set up a forum that the makers can use to communicate with each other. The best part about the software is that it’s open source, meaning that it’s free to use and anyone has access to it and can improve upon it.” 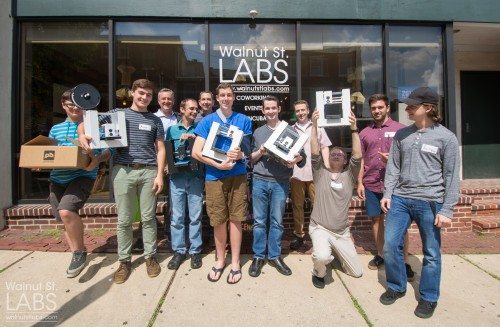 Q: How did people respond?

Ben: “The response was very positive. We were able to make a great impression on not only the people that signed up for the event but also other Makerspaces and local innovators. They seemed to really understand that we aren’t trying to capitalize on this technology, but that we want to make a social impact. Everyone seemed to be excited about exploring the possibilities of what they can make and experimenting with the Internet of Things.”

Q: The Internet… of Things?

Ben: “Yeah! The concept behind the IoT is that more and more physical objects are being embedded with electronics and can communicate with each other. With this kind of tech there is better connectivity in everything around us. For example, in agriculture technology, one can now fabricate a device with built in sensors to be put in water. These might be designed to track illegal dumping in water sources for instance. Before, we had no way of holding people or companies accountable for this kind of thing. Or even more simply, I could fabricate a device with a sensor that sends me a text every time someone walks through the door of the labs so even if I’m upstairs or downstairs I can come to greet people that walk in. It’s the way that all of these devices interact with each other that opens up amazing possibilities. That’s one of our main focuses in the boot camp.”

Q: What are your long term goals for the project? 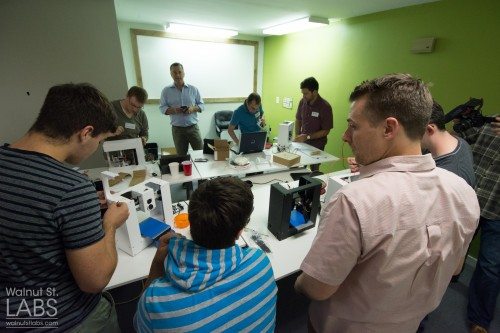 Ben: “I think there was a degree of perception that we as newcomers are trying to swoop in and claim expertise in order to commercialize this. That’s not at all our goal. We wanted to show how accessible this kind of technology is and to build up the amount of people locally that are savvy in this kind of micro-fabrication. We want to make a hub for makers and innovators to have a space to collaborate and share ideas in a physical space. We are already planning on relaunching the 3D Pinter Boot Camp V2 in late July. We are reassessing our position and want to find leaders in fabrication in the community and see if they are interested in contributing to the ecosystem of 3D printing. We are trying to find our connections to make the biggest impact as possible.

We don’t have the kind of space available for a full blown industrial Makerspace that can rival the ones found in big cities. We are interested with connecting to other organizations to see if they want to work with us to create a dedicated Makerspace.”

This is just the first of hopefully many Boot Camps that we have here at WSL. We are excited about the positive community response that we’ve had for the program and can’t wait to see how the program and the local fabricating community can grow together.