Huge thanks Ideas x Innovation Network and InvisionApp for helping sponsor the event!

The Walnut St. Labs Team and a few key Unisys people, namely Brittney Burchett, have busted their humps to ensure that our Prototyping Competition was a complete and utter success.  There were a number of immediate challenges that beset the group in light of the event’s more “nuanced” format. The most blatant of which was the problem of ambiguity.

We blasted out emails and targeted newsletters, posted blogs and social media campaigns, got featured in a Technical.ly Philly article, passed out flyers to West Chester University’s brightest, and probably bugged the sh*t out of everyone we knew, but the questioned still remained, “What the hell is a ‘no code’ hackathon?”. 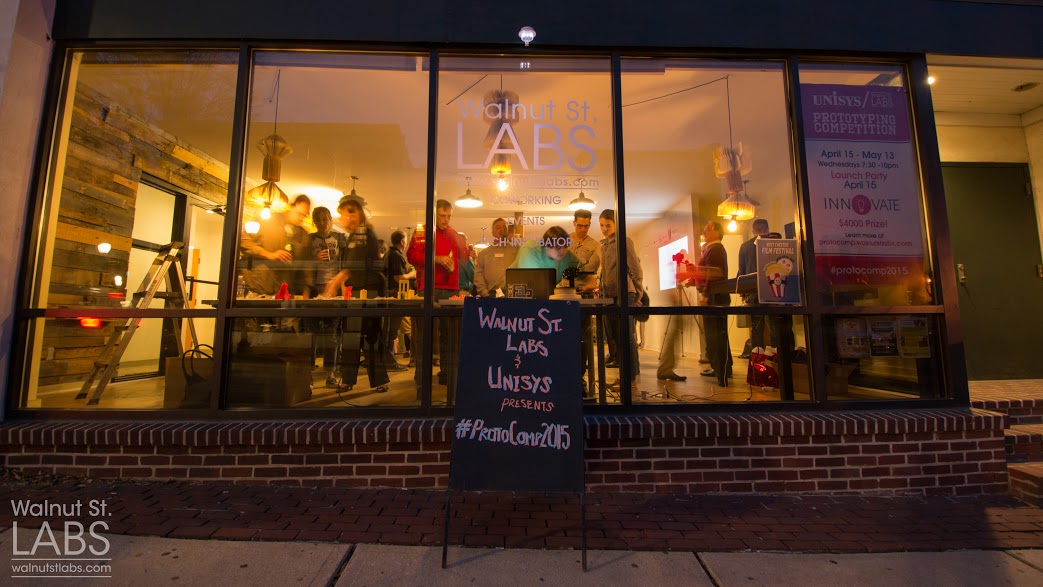 Despite the presence of some trailblazing-related obstacles, last night’s turnout was further validation that an inclusive framework for building competitions is really the way the go!  Our recent mention in About.com’s article pretty much sums up the ethos for this event, “You don’t need to code to be in tech.”

We’re used to sweating bullets at Walnut St. Labs because we do events all the time, but this time was special. We had 20 pizzas on the way, a blank sandwich board, five cases of beer, a couple waters, a cobranded sheet cake and 100+ people registered to cram themselves into our space. Our team had ascended to a whole new level of uncertainty that few human beings are capable of sustaining. Luckily, its part of our organizational values. We find that comfort zones are a killer of rapid progression. 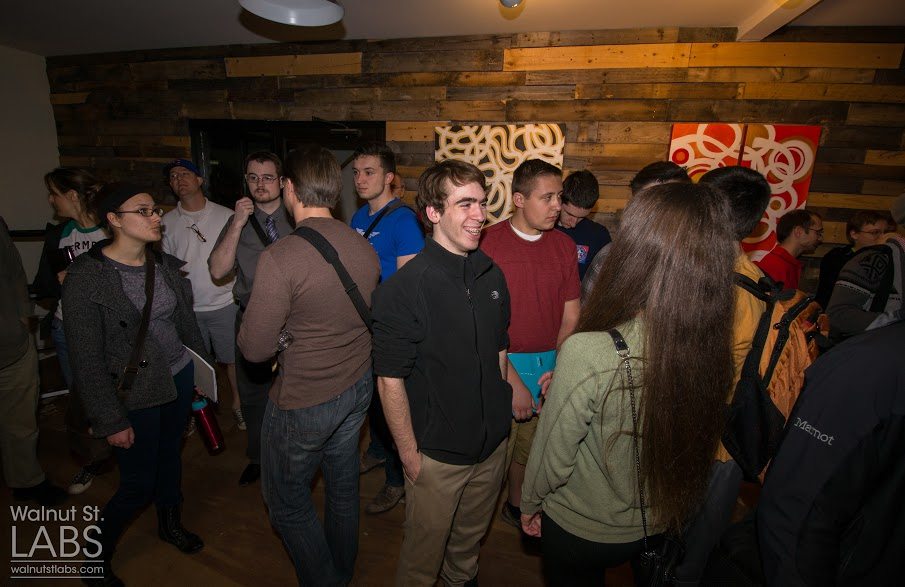 Brittney did an awesome job reaching out to various educational institutions who are leading the way in #edtech. Very few schools are aware of the disparate gap that lies amid a hungry tech job market and a dearth of available and qualified technologists, much less ambitious enough to bridge that gap. It was refreshing to see that so many of our contestants were young and, to some capacity, technologically adept.

STEM Academy and The Westtown School are two such institutions that really “get it” and are providing their students with opportunities to gain functional/practical knowledge for a digital age. Our hope is that the reverberations of such novel concepts will be heard by more conventional institutions who focus on fact recall. 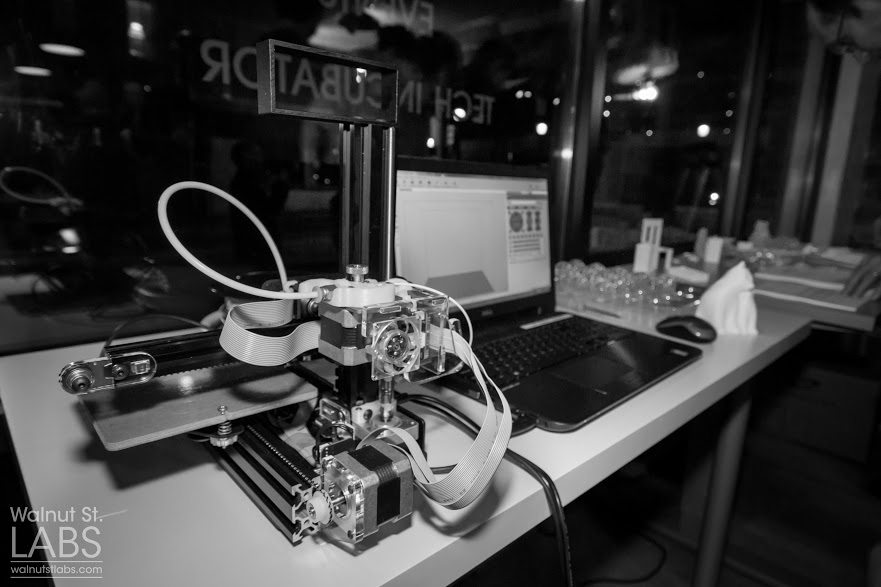 Our launch party was the first time that we had the chance to show off the 3D printers to the public, and it was a total hit! While running the gauntlet with Unisys, we’ve also partnered with NextFab to create a “Mini Makerspace” at WSL.  The mission is to expand the reach of newer fabrication technologies to populations that might not otherwise get the exposure. Wilhem Barnes did an incredible job entertaining a hoard of STEM Academy students. They really couldn’t get enough of the Bukito. 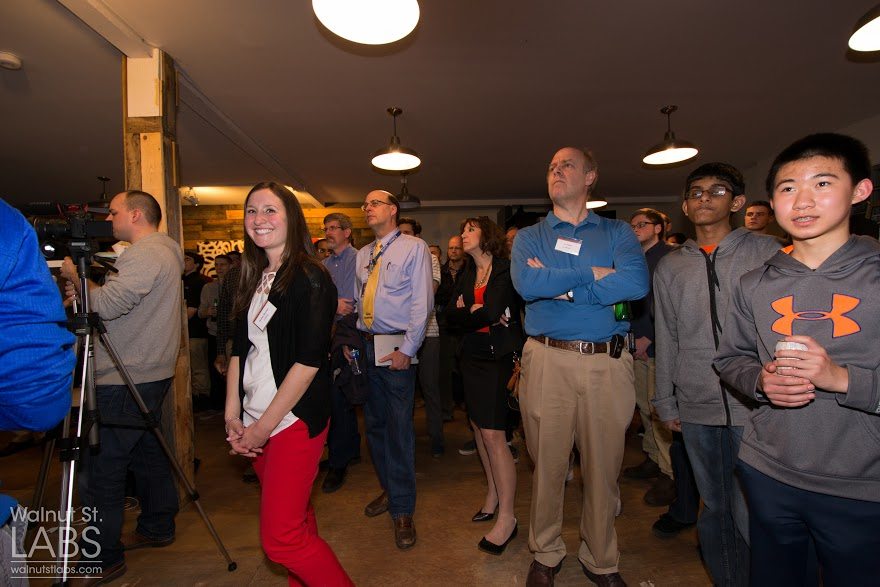 Brittney Burchett has worked really hard over the last several years to pioneer a whole division dedicated to innovative projects. Last night was a culminating experience for her, and it really showed! She was elated (and beaming!) to see these efforts displayed in the form of a community coming together to build teams and solve problems.

We’re infinitely grateful to her and Jim Thompson, the VP of Engineering and Supply Chain, who’s led the way in visionary efforts at Unisys for over 25 years. 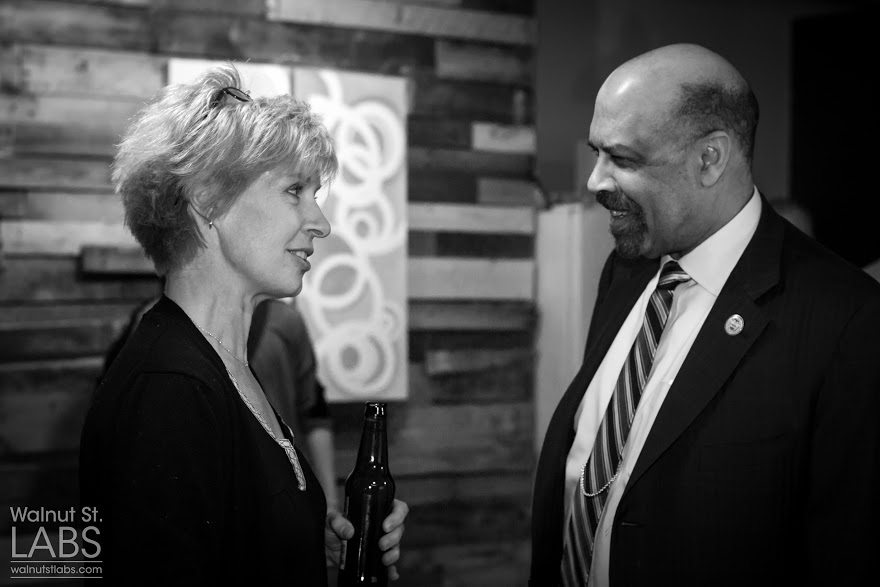 Mary Fisher (pictured above with Commissioner Terence Farrell) was recently named Chief Operating Officer of Walnut St. Labs by our Founder, Chris Dima. She’s helped coordinate all aspects of Walnut St. Labs’ primary source of income, 23 North Digital. In addition to playing a leading role at our digital marketing company, Mary is also a mother of four. Her music choice is indicative of the combined weight of both her work-related and domestic responsibilities, ‘Deep Jazz’. 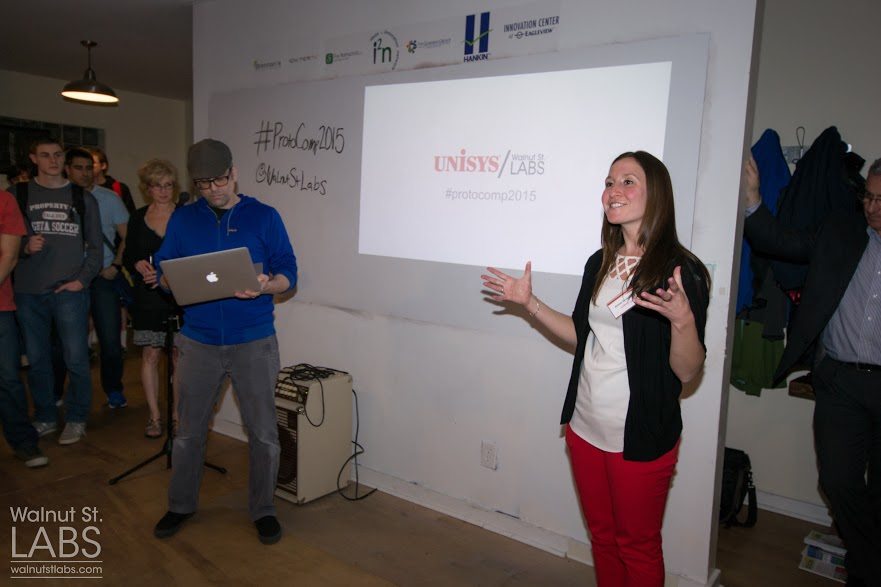 Chris explained how our relationship with Unisys was the result of continued serendipity. His neighbor and Score members, Bob Fedor, introduced David Houseman to Chris at our 2nd Startup Meetup. David was a former COO at Unisys, loved what we were doing and, in turn, introduced Chris to Jim Thompson. 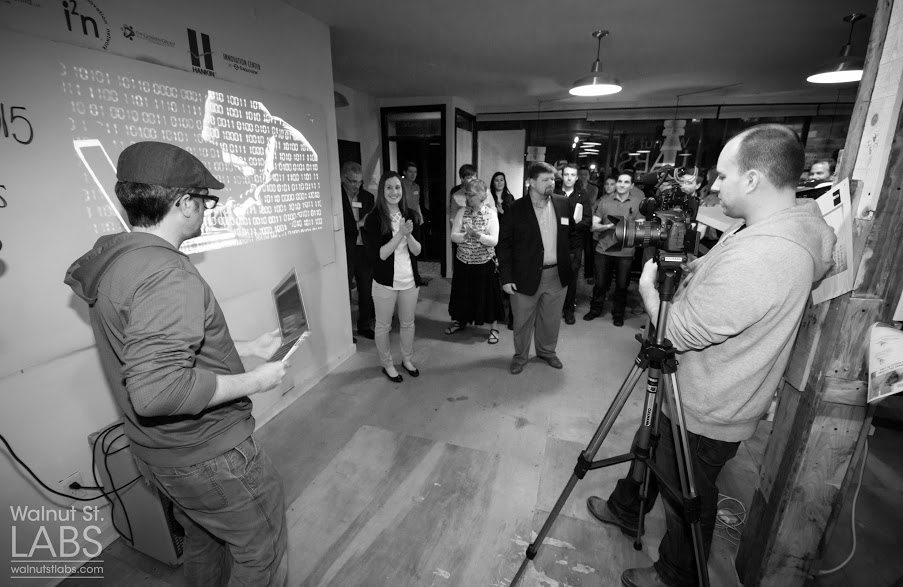 Walnut St. Labs was tasked with the unique opportunity to convey a piece of highly technical internet security software to a group with varying levels of technical skill, in a party setting. We didn’t want to ‘kill the vibe’ by diving straight into the deep-end, so Chris and Brittney kept it light and fun, while informing the group about the importance of STEALTH’s social and economic context. 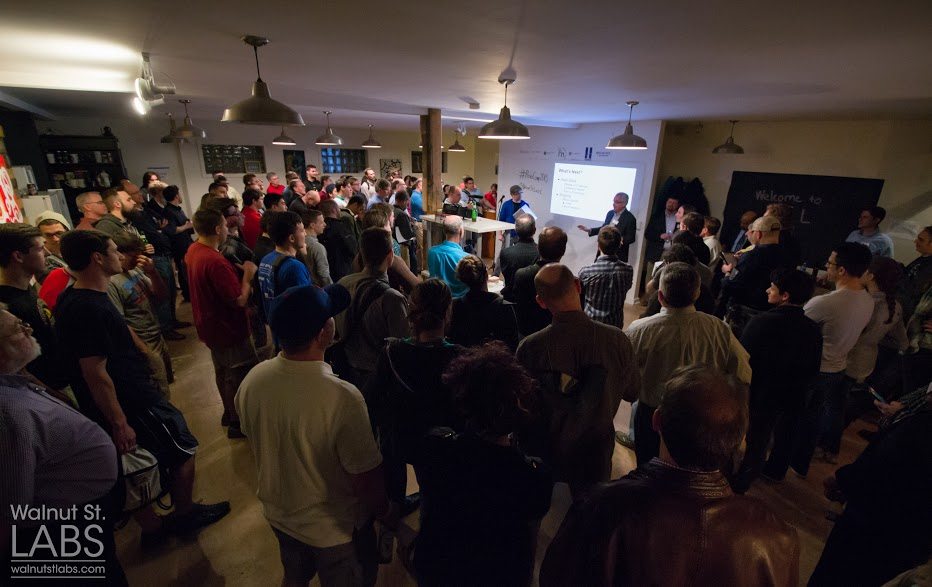 The truth is that some of the content from last night’s presentation was pretty heavy, but Chris did a great job of conveying the concepts with the oldest tactic found in “The Art of War”—humor. His decision to rely on the mystifying charm and energy of America’s most recognizable TV exercise personality was just what the doctor ordered.

Despite Richard Simmons’ more laughable attributes, he is the basic archetype for our Prototyping competition. As Chris so clearly stated, “It didn’t matter who you were or where you came from, Richard Simmons would include everyone”. 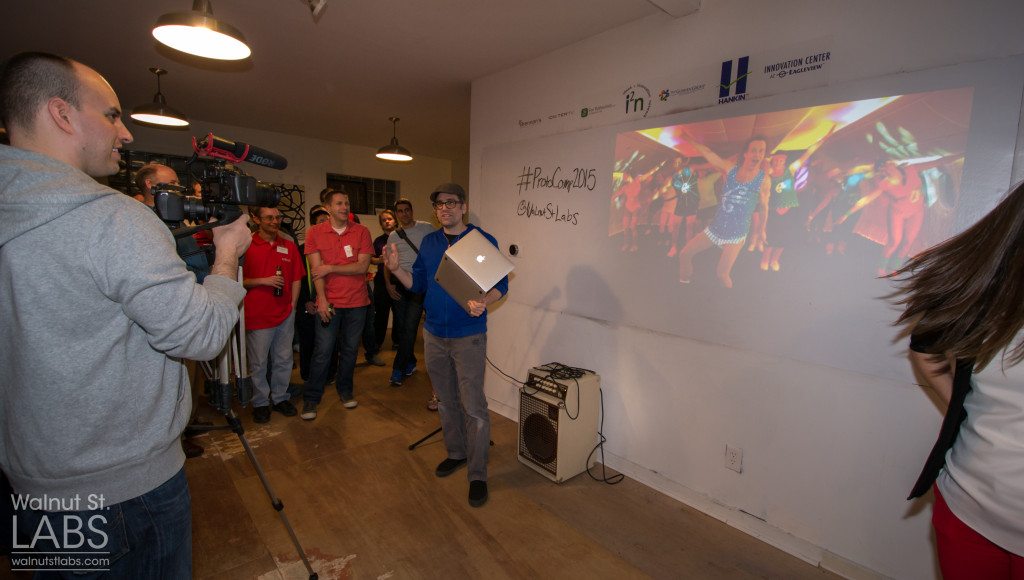 It may seem like a strange call to action, but Richard Simmons inclusive approach to exercise was a perfect candidate to drive this point home to our audience. We don’t care how experienced or well equipped you are. We just want to give you an opportunity to create with us.

Innovation favors those who question the norm. If the current perception of technology suggests exclusivity, then we need to relinquish all barriers that reinforce that perception and actively promote inclusion. 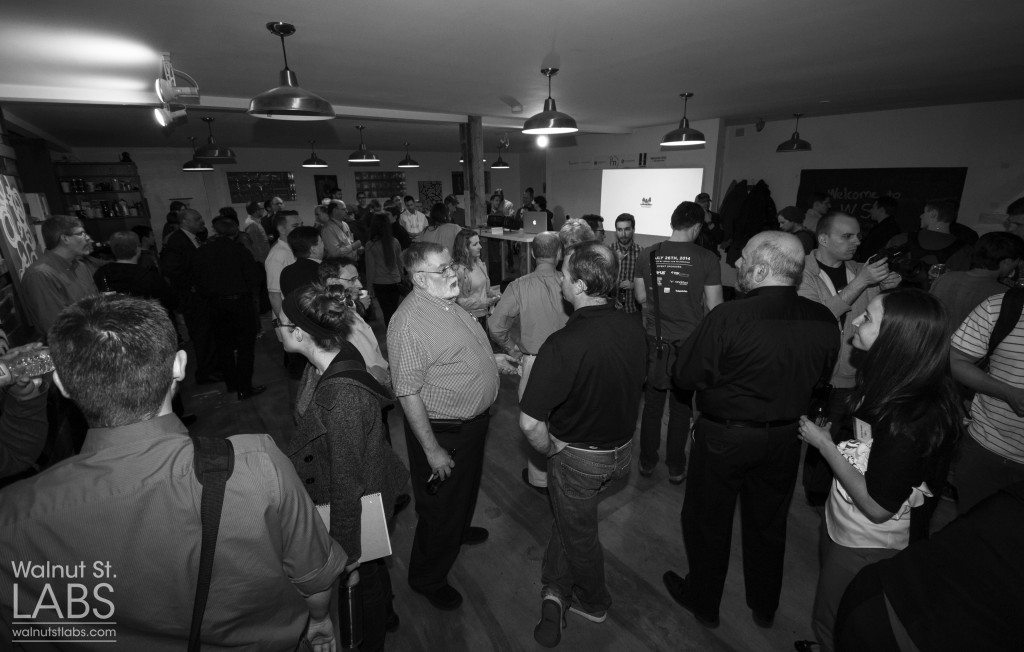 It was wild and crazy, but we were able to form 17 different teams, some of them containing up to five contestants. Many groups came prepared to sign up together, others entered alone and joined a team on the spot. We ended the night in a general state of disbelief. We had high hopes for this kickoff and we were able to supersede them.

We’re looking forward to the next 4 weeks where we turn the party into prototyping!