Last Night Owl’s Was a Party! 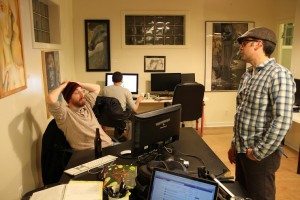 Last Tuesday, while WSL founder Chris Dima was busy with meetings, trips a to corporate coffee shop that will not be named in this blog, emails and other fun business owner type stuff,  Mei and I snuck out to the Beer Mill, bought ourselves the choicest of craft IPAs, and quickly hid all 72 of them in the communal fridge. We were greeted by Chris’s remarkably beautiful and significantly pregnant wife, Kiersten and their two cutie-pie daughters, Lucia and Calla. They brought with them some balloons with baby monkeys on them, and a very sugary, carb-loaded creation with the words “BABY” in all caps written on the top. It was at that point that I suddenly realized, Chris was pregnant too! Shortly after, I came to my senses and congratulated Keirsten in saying ” You’re really the man of the hour!”, in an effort to be as complimentary and gender neutral as possible. 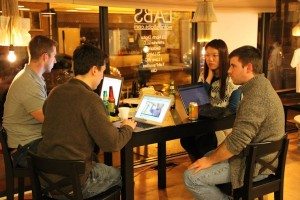 Around 7 O’clock or so,  everyone shouted “surprise, you’re pregnant!!” or something similar and proceeded to eat cake and guzzle as much heady beers as is socially acceptable during work parties, while maintaining a level of coherence necessary to continue on working and socializing. I didn’t show up until around 7:30 or so, because I fell asleep on my couch after returning home from work, so I admit the apex of the surprise was recounted from pure speculation on my part. And although I missed that climatic point in time where Chris realized that he too was pregnant,  I can assure you that it was glorious and touching, all at the same time. 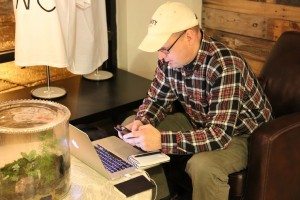 We had some new visitors to the lab, that had no idea of the havoc that ensues at our Baby Parties. Tom, a Developer from Wilmington DE, found solace in a quiet corner next to the terrarium.  It seemed to calm him from all the Bro-shower excitement. A couple  who was new to Night Owls Ryan and his girlfriend  jumped right into the party and talked (social media etc.) with Kevin and Matt for hours. 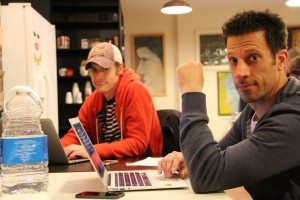 Some people did actually get some serious work done. Mark and Brandon grabbed a desk and plugged away on Vuier-related stuff. They just launched Vuier 2.0, the leading way to monetize digital video content. Coincidentally, they were the only ones who were adept enough to look up at Mike as he came by to take pictures of everyone. Perhaps their sharpened attention to their surroundings could have been attributed to drinking  tons of water, rather than beer.